There are two things that are really important in a church: The first is that people are having a deep and meaningful encounter with Jesus Christ. The second is when people visit, they are greeted with warmth and joy by the congregation and feel like it's the sort of community that they really want to be a part of. People want to feel that the church they attend will make a positive impact on their lives. I hope both things are part of your experience when you come and visit.

So, please come and visit! We invite you to be a part of our family at Trinity Anglican and experience God's transforming power through our Lord Jesus Christ. 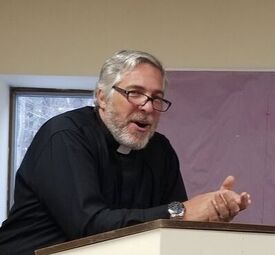 At 19 Fr. Mirabile experienced a dramatic conversion from drug addiction and alcohol. From then on, he devoted his life to bringing the healing love of God to everyone he met.

At 21 he left home in Connecticut to join Youth With a Mission to attend a DTS (Bible School) in the Netherlands, EU. After completing that program he completed studies with an AA. in Cross-Cultural Communication and Evangelism at the Amsterdam School of Missions, (YWAM, University of the Nations) in Amsterdam, NL.  While abroad he traveled throughout Europe, East and West Africa, and Asia preaching the gospel. He led mission teams, preached on the street, taught evangelism, and counseled addicts. He met his wife Inger while in Amsterdam, where they married.

Passionate about soul care, he continued studies in psychology at Liberty University online degree program. He completed the Program in Spiritual Direction at the Center for Spirituality and Justice in New Rochelle, NY (now closed) and is a certified spiritual director. He also has Substance Abuse and Gambling Education, CAP Certification, and Clinical Pastoral Care Certification. Fr. Mirabile self-study interests run wide, including ascetical theology, neurobiology, with a special interest in the role spirituality plays in neurobiology.

After being received into the Anglican Catholic Church in 2010 he served the Cathedral Church of the Resurrection, in Ansonia, CT where he was provost of the cathedral from 2011-2016.

Fr. Mirabile was called to pastor Trinity in Rochester, NH in April 2016 where he currently pastors. He is the author of the Deep Recovery Course, a 12-week program and workbook that combines spirituality, neuroscience and skills-based exercises to help people overcome life-controlling problems. This course is run regularly at Trinity in Rochester and Charleston, SC., and is will be going nationwide.
​
​He has been married to his wife, Inger for 36 years and they have four adult children. Fr. Mirabile believes their greatest achievement is raising emotionally healthy children with their faith intact. He is a passionate motorcyclist and Moto Guzzi enthusiast. The Rev. Deacon Mike McKinnon-Dane has attended Trinity Anglican Church for the past 11 years, serving on the vestry as Junior Warden from 2015 to 2020, and serving at the Altar since 2014. In 2018 through 2019, he was temporarily assigned by The Most Rev. Brian Marsh to St. Augustine Church in Scarborough, Maine as a Lay Pastor, providing pastoral support and conducting long version morning prayer with sermons. After passing examinations, he was ordained to the Deaconate in October 2020.

Today, Deacon Mike is a member of the Diocese of the Northeast Standing Committee, and a sixth year T.A.C. representative to the National Synod. Prior to becoming a member of T.A.C., he was a member of the Anglican Catholic Church where he served on the vestry and was a delegate at Diocesan meetings, as well as authoring and submitting press releases for the Bishop of the Diocese. Also in the past, he was a member of St. Mary’s Roman Catholic Church. He has a passion for church growth, including authoring “Crossing the Chasm, Elemental Church Growth”, and has chaired several committees on evangelism and growth. 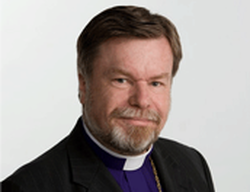 He was consecrated Bishop on December 9th, 2006 and has served as Bishop Suffragan and Coadjutor for the Diocese until elevation to Ordinary. The new bishop received the episcopal consecration at St. James Anglican Church in Elmhurst, Queens, New York. The chief consecrator was Most Reverend, Louis W. Falk, Archbishop and Metropolitan of the Anglican Church in America. Co-consecrators were Bishops George D. Langberg, David L. Moyer, Juan Garcia and Paul C. Hewitt.

Bishop Marsh holds several advanced degrees, including a M.A in speech from Bowling Green State University, a Masters Degree in Divinity from the General Theological Seminary in New York City and a Doctorate of Ministry.

He has been married to Ljuba (Greene) Marsh since 1977. Mrs. Marsh is a school administrator. They have two children; Alexandra, who is a graduate of the University of Toronto and currently lives in London, England and a son, Colin, who is a student at Bennington College and recently received certification as an EMT.
​
The Anglican Church in America is part of the worldwide Traditional Anglican Communion, with members in 44 countries, which seeks to uphold the Catholic Faith, Apostolic Order, Orthodox Worship and Evangelical Witness of the Anglican tradition within the One, Holy, Catholic and Apostolic Church of Jesus Christ. The Communion holds Holy Scripture and the ancient Creeds of the Undivided Church as authentic and authoritative, and worships according to the traditional formularies of the Church.
Trinity Anglican Church, 180 Rochester Hill Road Rochester, NH 03867