A traditional Anglican church with a heart for the world God lovesQ
Choir Director, Carlos Martinez 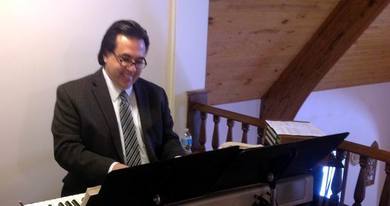 Carlos Martinez (Mr. M), a native of San Antonio, Texas has been living in the New England area for 23 years.  An accomplished musician Mr. Martinez has both sung and traveled to many parts of the world singing and conducting opera.

Mr. Martinez is a noted conductor in opera, band music and musical theater and is also a sought after choral clinician.  Mr. Martinez has directed the Classical Singers, a group of 26 young singers, who performed and toured England, Austria, Germany, New York City, New Jersey, New England, and participated in the Salzburg Festival. As an opera singer, Carlos performed as a bass in the United States and abroad.  Mr. Martinez has performed with Houston Grand Opera, Opera to Go in Houston, TX, San Antonio Opera Theatre, Opera Iowa, Des Moines Metro Opera and the St. Petersburg State Opera in Russia.

Currently Mr. Martinez is the Music (Band) Director for the Center Harbor Town Band and is a public school teacher in New Hampshire and works for the Shaker Regional School District at both Belmont Middle and Canterbury Elementary Schools.  Mr. Martinez is also organist/choir director at Trinity Anglican Church in Rochester, NH.  Mr. Martinez also runs a successful private music studio in Concord, NH. He is the Music Director of Piccola Opera which is based in Concord, NH.

Mr. Martinez was nominated for the Disney, Teacher Hand Award, honoring dedicated teachers in the public school system.  Mr. Martinez was twice the recipient of the Compass Award honoring teachers excelling in their field of expertise.  Mr. Martinez is currently a member of "Omicron Delta Kappa" an honor society.  Membership in Omicron Delta Kappa is one of the highest collegiate honors that can be awarded to an individual. In the spring of 2013 Mr. Martinez was a nominated for a Grammy. The award entitled, The Grammy Music Educator Award goes to music teachers who have played a critical role in the development of music students in their schools and for the remarkable impact they have left on the community.
Trinity Anglican Church, 180 Rochester Hill Road Rochester, NH 03867